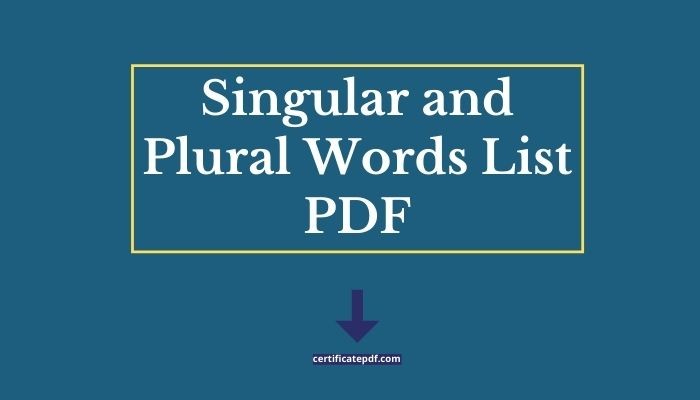 singular and plural words list pdf: Singular and Plural Words belong to the family of Nouns, sometimes they are called Singular Noun or Plural Noun whatever the word is. Now we will discuss these nouns one by one.

Singular nouns are those words which denote the subject, object one in number. In other words we can say that a singular noun refers to a single (one) place, name or thing that is called Singular Noun.

Above examples help us to illustrate that a single subject, object, place etc are considered as Singular Nouns.

These examples tell us that there are more than one book, men, bike and mobile hence they are kept in the category of Plural Noun.

If we talk about the rules for making singular to plural and vice versa then there are many rules but firstly we need to understand their identification of Nouns whether they are singular or plural.

If you want to change a singular word to a plural word, then simply add ‘s’ to the end of the word. For converting plural to singular noun just remove ‘s’ from the last of the plural word.
Example:-

In the case of a singular word ending with ‘f’ or ‘fe’ then remove ‘f’ and add ‘ves’ to the last of the singular noun to make it a plural noun.
Example:-

In some cases, singular nouns ending in -s or -z, require that you double the -s or -z prior to adding the -es for pluralization.

These are general rules for changing most of the words to plural nouns from singular nouns. However there are few words which remain same in plural form, some of them are listed below